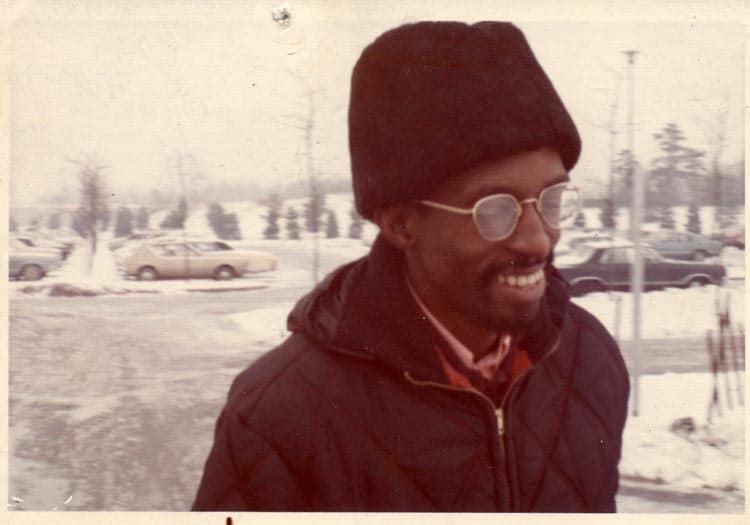 A staple of the hcmf// programme, our annual mixtape reimagines performance as playlist.

The Arditti, Bozzini and Ligeti quartets combine into a dozen to perform a startling rendition of Julius Eastman’s ferocious opus Evil Nigger.
Having taken on a much-deserved legacy in recent years for his striking approach to minimalism and the conception of what he called ‘organic’ music, this work represents a turning point in his career. Unflinching, confrontational and sonically relentless, it is also a deeply political act, reckoning with the way work was billed and presented in the predominantly white music institution Eastman occupied. The piece speaks to an essential voice that’s long gone missing.

Written a decade into Eastman’s career, which sprawled a daisy-chain of aesthetics and ideas, Evil Nigger was initially conceived for four pianos – but Eastman noted it could be played on any number of similar instruments. The piece has received numerous reinterpretations in recent years, including a version for three pianos at Unsound 2015, and another by Polish composer Tomas J Opalka, performed by the Arditti Quartet and an accompanying tape of string music at Sacrum Profanum 2017. In this blistering performance of Opalka’s version, Evil Nigger is recast for three live string quartets.

Composer, pianist and bandleader, Alexander Hawkins believes in the ‘fundamental reassertion of composition within improvised music’. This stylistic convergence is reflected in a programme of works by Muhal Richard Abrams – an artist as well known for arrangements as he was for his work with the fiercely free-spirited Art Ensemble of Chicago – and Anthony Braxton, who placed jazz improvisation into a contemporary framework. Alongside innovators such as Wadada Leo Smith and Leroy Jenkins, Abrams and Braxton were frequent collaborators. Here, Hawkins laces together their legacies with his own piece, It Should Be a Song, considering the debt he owes to their practiced play.

Okkyung Lee is a cellist renowned for her vigorous improvised excursions; her breathless record Ghil was made in collaboration with composer and producer Lasse Marhaug, who emphasised her scratchy, unrelenting approach. For the mixtape, she joins saxophonist and reeds player John Butcher, who’s improvised with just about everyone – and everything. His work considers the ever-changing resonances that come from different instruments, environments and contexts. Joined by the distinctive musical language of Lee, his sound will morph once more.

Ahead of her upcoming performance of POLES, Camilla Hoitenga presents further travels in the world of Stockhausen, performing two pieces from the cycle AMOUR. One of Stockhausen’s most personal works, each piece in this often melodic and narratively driven cycle was written for a loved one. Initially conceived as a clarinet work, Stockhausen revisited the piece in 1981, crafting a new flute version specifically for Hoitenga, with whom he worked extensively. Their close musical relationship shows in these pieces, which join other works written for Hoitenga by Peter Eötvös and Mike Svoboda.

More artists are yet to be added to this action- packed edition of hcmf// mixtape.

Please note: this is a free event but tickets are limited. They can be booked in advance online or via the Box Office.

As this is a live broadcast, audience members must be seated by 9.45pm.

This event will finish at approximately midnight.